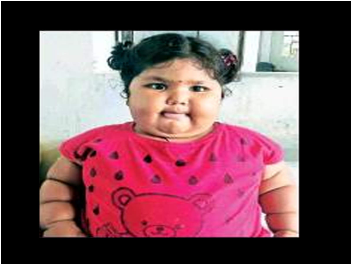 CHANDIGARH: Chahat weighed 20kg when she was 9-month-old and is now 25kg at 16 months. She is twice the weight of a normal child at her age. Chahat is one of the 51 cases reported globally in a published medical literature as an obese kid suffering from leptin deficiency disease, a rare genetic disease where there is no satiety signal given to the brain. Her case report, which has been recently published in the “Journal Of Clinical Research I n Paediatric Endocrinology”, finds genetic link with central Pakistan, which has seen 40 such cases so far.

Chahat had been getting treatment from the PGI since she was 9 months old. Concerned about her weight, the Union ministry has asked the PGI to go ahead with the treatment and they shall bear the cost. “We are pursuing many companies for importing the hormone therapy medicine. It can be injected like insulin and is too expensive,” said Dr Devi Dayal, paediatrician in the PGI , who had been taking care of the patient.

The first case of mutation of the leptin gene resulting in severe obesity was reported in Pakistan in 1997. In India, the first case was reported in New Delhi in 2013. “We are waiting for the medicine to be made available. In between, we had taken her to Vijaywada for bariatric surgery,” said Suraj, father of Chahat.

The Punjab and Haryana high court last year had invoked its suo motu powers on the PGI for turning its back on the treatment of Chahat when she was nine months old. The infant’s family had returned to Amritsar, their native city, from the PGI, as her family was unable to afford Rs 2 lakh for initial tests.

The case report, “Severe early onset obesity due to a novel missense mutation in exon 3 of the leptin gene in an infant from north-west India” stated that such patients belonged to consanguineous families of the Arain tribe, who live in central Punjab, Pakistan. “Incidentally, our patient hails from a geographical area in Indian Punjab, approximately 30 miles away from this location, where most patients so far described live.