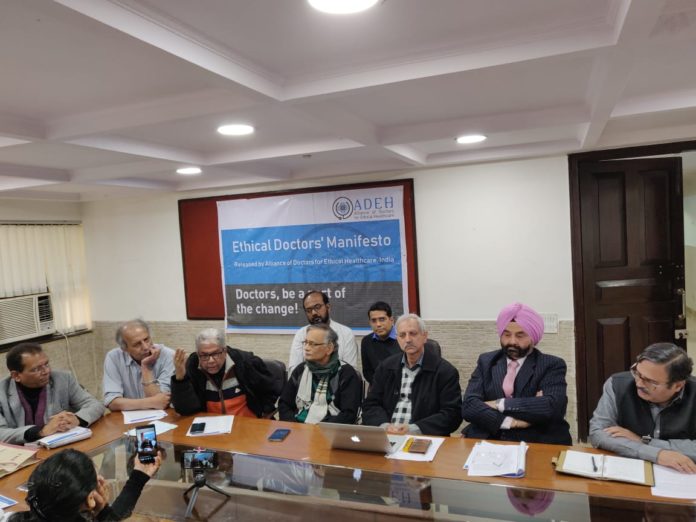 New Delhi: The Alliance of Doctors for Ethical Healthcare (ADEH) feels that Ayushman Bharat has made health an inevitable issue of electoral politics in India. Though, the alliance feels, Ayushman Bharat too does not gel with its idea of healthcare and is itself plagued by many lacunae, it is a game changer in the sense that no political party from now onwards would have guts to ignore the health concern of the country. Hence, the idea of Ethical Doctors’ Manifesto was born.

Releasing the first draft of Manifesto, ADEH dubbed crass commercialization of healthcare in India as the villain of the piece. In the draft it has raised comprehensive issues that add up to precarious healthcare scenario in the country. It has underscored that unless these issues are addressed, the avowed aim of Universal Healthcare would never be met.

The first draft goes as follows:

We have observed with some dismay: 1. The increasing commercialization of healthcare in this country, the failing public healthcare system, billions of dollars of Foreign Direct Investment (FDI) in corporate hospitals, diagnostic and radiology chains, the proliferation of private medical colleges, and the exorbitant fees charged by them and the huge trade margin in pharmaceutical/ device and implants’ (price to the whole seller and Maximum Retail Price) have caused billions of patients in India major financial hardship. 2. There is an increasing societal unrest and anger against our once noble medical profession mainly due to this uncontrolled commercialization. In an overall atmosphere of intolerance, violence against doctors is on the rise. Those of us who are trying to do ethical and rational practice are also becoming depressed by the current profiteering and unscrupulous environment that breeds malpractice, induces unnecessary investigative and operative procedures, the prevalence of ‘cut’ practice. This has damaged the faith and trust of the common man in the once revered medical profession. 3. The Medical Council of India (MCI) has failed in its rather feeble attempts to enforce ethics among private practitioners. The National Medical Commission that is proposed to replace MCI is a totally undemocratic structure and is no remedy to the existing MCI. It has not constituted a separate ‘Board for Medical Ethics’ and has not capped fees of 50% of the seats in private medical colleges at par with government medical colleges as proposed by ADEH. Furthermore, it has allowed for-profit entities to enter the field of medical education which will further add to corporatization of healthcare and medical education. 4. The recently launched National Health Protection Scheme (NHPS), as well as the programme for the provision of Comprehensive Primary Health Care (CPHC) are based on faulty foundations. Apart from their low budgetary provision, there is every possibility that the majority of the government’s expenditure on health care will be diverted to the high-end interventional procedures only available in medium and big hospitals. We believe that the government system lacks the will and organizational capacity to manage a programme of this scale. In the absence of a robust regulatory mechanism and mandatory standard treatment guidelines; we fear that the schemes will be misused by corporates and other big private hospitals for profiteering through indulging in un-indicated procedures and surgeries. It will however give good business to the private sector and insurance companies. Against this backdrop, we request that all political parties should pledge in their upcoming election manifestos a commitment to bring in a system of Universal Health Care by strengthening and expanding the public health system so that it will be the lead player of a rational, humane health care system in India. Regulation and reforms in the private sector are of paramount importance to ensure that rational and ethical healthcare is accessible to all citizens.

Our demands are that the government should: 1. Effectively implement Niti Aayog’s proposal in the concept note released by it on 8th June 2018, to cap the trade margin up to 30% in case of all medical devices. 2. Form and use the Trust-Model as in Andhra Pradesh for procuring the services of private practitioners according to need on the principle of ‘Standard Payment for Standard Care’. It should not use the American model which has been rejected by many countries, of using profit-driven insurance companies. 3. Ban the production of irrational medicines and irrational Fixed Dose Combinations of medicines, and give a directive to all pharmaceutical companies to market their medicines only under their generic names. (Company’s name in the bracket) 4. Regulate Drug prices in line with the rationalization of trade margins in medical devices. The ex-factory cost of the drugs should be actual cost based. 5. Enact and implement the Appropriate Clinical Establishments Act in all states with the focus on having mandatory standard treatment guidelines in place and formulate a patients’ rights charter. 6. Provide free medicines and investigations in all public hospitals on the lines of Tamil Nadu, Kerala and Rajasthan 7. Pledge to increase the public expenditure on healthcare from 1.1% to 2.5% of GDP within the next four years and then increase it to 5% in subsequent five years. 8. We demand that the NMC should take action against ‘Fake faculty’ in private medical colleges and address falling standards of medical education, as well as to regulate tuition fees of 100% seats in private medical colleges.

We request that the National Medical Commission appoint two representatives from ADEH in its ethics committee to ensure observance of the science and ethics of medicine and to ensure that justice is done to the aggrieved patients and affected doctors.

Ethical Doctors’ Manifesto The Alliance of Doctors for Ethical Healthcare (ADEH) is a group of medical professionals from across India, who are committed to patient-centered rational healthcare. We have supported the capping of stent prices by the National Pharmaceutical Pricing Authority, made a submission to the Joint Parliamentary committee on the draft of National Medical Commission, opposed the irrational ban on the production of oxytocin in the private sector and also backed the proposal put forward by the Niti Aayog to cap the trade margins to 30% for all medical devices. Some of us have over the years been consistently writing/ advocating/litigating on some of the issues which have resulted in some recent tangible change. We can claim partial credit for the MCI dissolution.