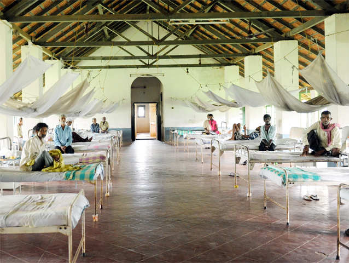 MUMBAI: Ahead of the first-ever United Nations High level Meeting next month, the World Health Organisation on Friday announced crucial changes to the multi drug resistant TB treatment regimen, which includes expanding the usage of the latest tuberculosis drug, Bedaquiline. It also calls on countries to minimize the use of injectibles, which are known to cause serious side effects in patients.

In its last-issued guidance in October 2016, the WHO had restricted usage to the breakthrough drug owing to concerns around its effect on the heart (cardio-toxicity). The drug was also given conditional approval by the USFDA in 2012 on the basis of the company’s phase 2 data.

However, the UN health body stated that new evidence from clinical trials and observational studies prompted a formal review of its guidelines. As per revised guidelines, Bedaquiline can now be used in treating both kids and adults for up to 6 months, on whom two of the most potent first-line TB drugs – rifampicin and isoniazid—show little effect.

“Building on the available new data, and with the involvement of a large number of stakeholders, WHO has moved forward in reviewing the evidence and communicating the key changes needed to improve the chances of survival of MDR-TB patients worldwide,” said Dr Soumya Swaminathan, WHO Deputy Director-General for Programmes.

The communique also asks TB programmes to prioritize an all-oral regimen over injections and such as kanamycin and capreomycin, given increased risk of treatment failure and relapse. The injections, while considered “life-saving”, are known to leave patients deaf and cause kidney failures, prompting them to drop out of the treatment.

Médecins Sans Frontières , a humanitarian aid organisation, stated that the newly recommended regimen could help improve cure rates and decrease mortality. It also called on US pharma company Janssen, the manufacturer of Bedaquiline, to take steps to make the patented drug more affordable for low- and middle-income countries, including India, which has the highest TB burden in the world.

“Governments and treatment providers should urgently make sure people can access optimal treatments including bedaquiline, and this means Johnson & Johnson needs to lower the price of the drug and ensure it is available for every person who needs it,” says Mercedes Tatay, a doctor with MSF’s DR-TB project in Mumbai.

Bedaquiline, sold under the brand name Sirturo by Janssen (a subsidiary of Johnson & Johnson), and Delamanid, sold by Japanese drug maker Otsuka, are two of the new TB drugs approved by the US Food and Drug Administration and European Medicine Agency after 40 years. However, citing insufficient evidence, the WHO has left its guidance on Delamanid unchanged. In January this year, the Organisation had advised all national TB programmes to include delamanid only under limited circumstances, when patients cannot tolerate certain second-line TB drugs.

While the complete changes will be issued later in 2018, the “rapid communication” issued today is aimed to guide member states to prepare to implement the new changes at the earliest.