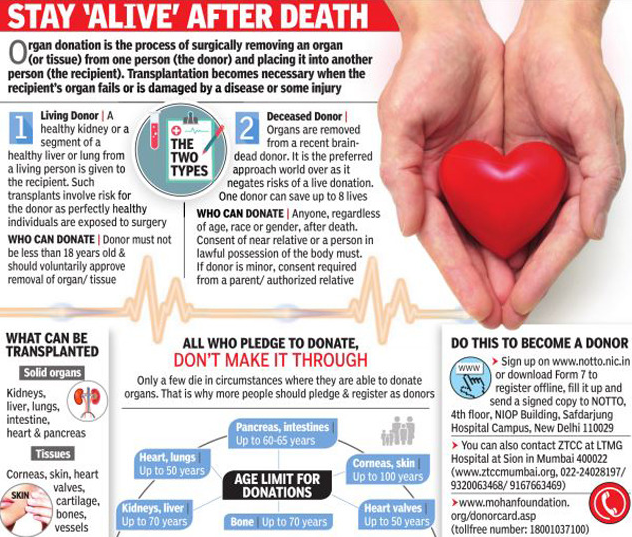 Fifteen-year-old Mumbai resident Vaibhav Sanghavi had just completed his Class X exams in 2016 when he was asked a question that is rarely asked to someone so young: Would he consent to donate the organs of his 44-year-old mother who had just been declared brain dead? As their father was long dead, it was left to Vaibhav and younger brother Ravi to decide.

They answered in the affirmative, proving what experts always say about the willingness of today’s youth to accept and promote the otherwise-ignored theme of organ donation in India. The boys attended all the meetings and seminars on organ donations that they were invited to, unofficially earning the title of ambassadors of organ donation in the Maharashtra circle. “Youngsters can motivate other family members. They are instrumental in making decisions as far as organ donation is concerned,” said Dr S K Mathur of the Mumbai Zonal Transplant Coordination Centre (ZTCC).

Statistics underline the enthusiasm among youth. According to NGO Mohan Foundation, 81% of the pledges for organ donation signed between 2010 and 2018 were by those in the 18-40 age group. The largest group of signatories was from the 21-30 age group—22,850 out of the 43,792 pledges.

Even when it comes to cadaveric donations, youth make up a big chunk. Statistics available from Tamil Nadu, which records the highest number of cadaveric donors in the country, show that almost 50% of the donors (88 out of the 171) in 2016-2017 were in the 10-40 age group. “Over the years, I have noticed that most donations come from people who are in the 15 to 30 age group,” said Mohan Foundation founder Dr Sunil Shroff.

There is no nationwide study of age profiles of Indian deceased donors, but doctors say that the youth and the aged form the biggest groups of donors. The reason for this is not hard to find. Road traffic accidents and intracranial bleed are the two main causes of brain death, which is a precursor for cadaveric organ donations. “The youth are mainly involved in road traffic accidents while the elderly suffer bleeds,” explained Dr Mathur. A 2014 research report about cadaver organ donation in Delhi/NCR by Mohan Foundation found that the total number of brain deaths due to accidents is nearly 1.5 lakh annually. Other causes of brain deaths were sub-arachnoids’ haemorrhage and brain tumors.

Narmada Kidney Foundation’s Dr Bharat Shah offers a nuanced insight. “Whenever there is a brain death and the consent has to come from youngsters, the answer is a yes,” he said. It is likely to be a no if the elderly have to give consent.

Liver transplant surgeon at Kokilaben Ambani Hospital Dr Ashutosh Chauhan concurs. “The youth of this country are socially conscious and aware. More often than not, they are positive about organ donation as they have read about a case in the newspaper or on social media,” he said. “Often, it’s a matter of just introducing them to the idea of organ donation and telling them about the benefits,” he added.