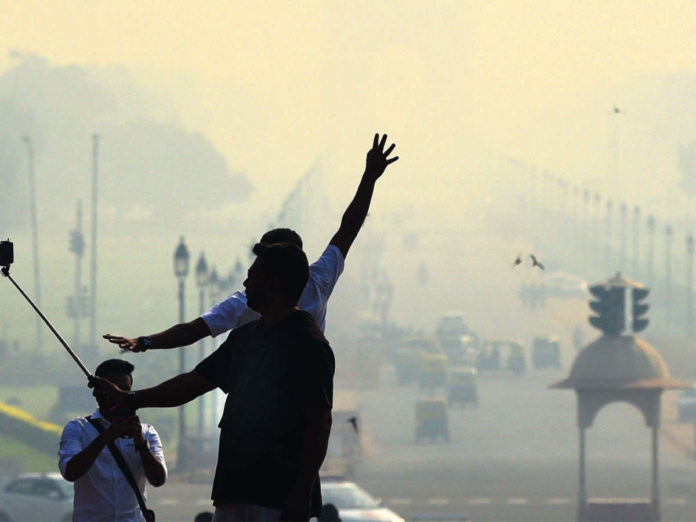 NEW DELHI: Ahead of the pollution season, the Centre on Monday launched an air quality prediction system that would forecast the state of the air three days in advance for various areas in the capital and several localities in Gurgaon, Ghaziabad and Rohtak.

The new service is expected to not only help residents gear up for bad-air days but also equip enforcement agencies in taking pre-emptive action and issuing warnings.

The Air Quality Early Warning System is based on real time observations of air quality and gives details of natural aerosols like dust, SO2, NO2 as well as particulate matter (PM2.5 and PM10) using different satellite data and other sources.

“People can access the information on air quality for the next three days through the ‘media corner’ of the CPCB website. The system is meant to issue alerts on large scale air pollution events which may occur over Delhi region,” said CPCB chairman S P Singh Parihar.

At present, System of Air Quality and Weather Forecasting And Research (SAFAR), under the ministry of earth sciences, issues forecasts of the next day’s air quality. The new warning system is a more comprehensive initiative. “The system has benchmarked data taken during November 2017 and June 2018. The prediction will have a margin error of 10%,” said K J Ramesh, head of the India Meteorological Department.

The system has an in-built website which can be accessed by CPCB and officials of the Environmental Pollution Authority for taking necessary steps depending on the forecast. These agencies will also issue alerts, bulletins and warning messages on anticipated emergency situations through the central pollution watchdog’s website and the media.
“It is designed to predict extreme air pollution events and give alerts to take necessary steps as per the Graded Response Action Plan (GRAP) of the government,” said environment and earth sciences minister Harsh Vardhan, while launching the first system of its kind in the country.

The prediction system was developed by scientists of the earth sciences ministry with technical support from the US National Centre for Atmospheric Research (NCAR) and the Finnish Meteorological Institute (FMI).

Ramesh said, “The ministry will be making further attempts to assimilate more data of other pollutants and also to improve accuracy of predictions with technical support from NCAR and FMI.”

Immediately after its launch, CPCB uploaded the first 72-hour predictions for different localities of Delhi, Gurgaon, Ghaziabad and Rohtak giving the Air Quality Index (AQI) and advisories as to what such levels mean for people in terms of ‘possible health impacts’.

The forecasts show that a majority of the stations in Delhi can expect to report “poor” AQI on Tuesday, Wednesday and Thursday.

Areas around the monitoring station at MD University Rohtak, Haryana are likely to have “good” AQI while Vasundhara, Ghaziabad and Vikas Sadan, Gurgaon, may have “very poor” AQI on these days.