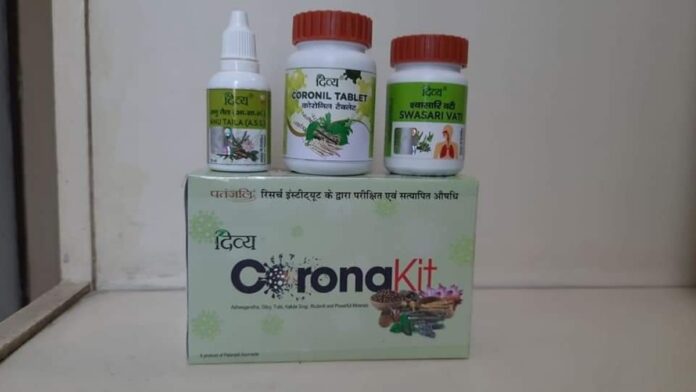 Ambala : More than two months after the Khattar government announced distribution of one lakh Coronil kits free of cost to patients infected with coronavirus, the ayurvedic medicine packs are yet to be distributed anywhere in Haryana.

The kits were ordered from Haridwar-based Divya Pharmacy, an ayurvedic manufacturing unit of Patanjali Yog Peeth, after state health minister Anil Vij had in his tweet on May 23 said that the government will contribute half of the cost through the state’s Covid relief fund and the rest will be borne by the manufacturers.

The announcement cost ₹2.72 crore to the state, according to which 25,000 kits each containing Divya Coronil Kit 80 tab, Divya Swasari Vati 80 tab and Divya Anu Tail 20ml were to be supplied at warehouses in Ambala, Karnal, Rohtak and Gurugram as per an official purchase order made on May 18.

“However, soon after the order delivery in June, the kits were stopped for distribution in districts pending a sample test by the Haryana Medical Services Corporation,” officials said.

“I joined on August 2, but the reports suggest that on July 7, Coronil was found fit on the said norms,” the doctor added.

Dr Satpal Jast, Ambala Ayurveda officer, said, “We have not started distribution as there are very few active cases of coronavirus in state. However, the kits will be handed over to the patients if cases rise in the coming weeks.”

His counterpart in Yamunanagar, Dr Dilip Mishra (additional charge) contended that the department has received 2,500 kits from the Ambala warehouse. “These will be kept and provided to patients as an immunity booster if a third wave kicks in,” he said.

The issue also sparked a controversy as the Indian Medical Association (IMA) had objected to a statement by Patanjali’s co-founder Baba Ramdev on allopathic medicines in treatment of coronavirus. The association had criticized the move by the state calling it “a complete waste of relief funds.”

However, Vij had said that they cannot force patients to take this medicine but many believe in Ayurveda and its benefits.