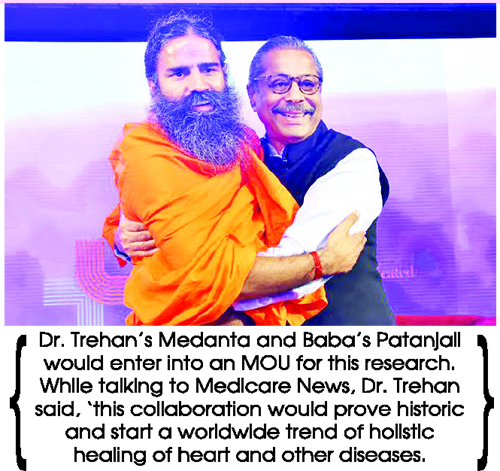 Medanta and Patanjali announces joint research for fusion medicine
New Delhi: How about Dr.Naresh Trehan, globally famed heart surgeon, like Baba Ramdeo, starts prescribing potions like bottle guard juice ( lauki juice), Arjuna tree bark capsules along with bypass and angioplasty for treating heart diseases in times to come. You might miss a couple of heart beats but it is pretty much a possibility. He would willingly do it but not before he finds them really efficacious after extensive research.
In the concluding day of 3 day International Coronary Congress 2016 in hotel Taj here on December 13, Dr. Trehan and Yoga maestro Baba Ramdeo announced collaboration on research for the fusion medicine for treating ailments including heart disease, cancer, low immunity.  Dr. Trehan’s Medanta and Baba’s Patanjali would enter into an MOU for this research.
While talking to Medicare News, Dr. Trehan said, ‘this collaboration would prove historic and start a worldwide trend of holistic healing of heart and other diseases. I have long been of the view that blending of modern medicine with yoga and Ayurveda would make treatment a lot cheaper. But it needs an extensive research. Coming together of Medanta and Patanjali Ayurveda would prove a turning point in the history of medicine.’
Dr. Trehan elucidated further- ‘We prescribe Statin for lowering cholesterol, a heart disease risk factor but it has been widely found that it is causing some neuro-mascular side effects that need to be done away with. Baba Ramdeo claims that the medicine created out of Arjuna tree bark can do this better without any side effect. We have decided to verify this claim. After due diligence, if this claim turn out clinically true, can prescribe this in place of statin. Baba also claims that bottle guard ( lauki juice) can eliminate the need of angioplasty because it cleans blocked arteries.’.
Dr. Trehan said, ‘around six crore people in India already have heart related diseases and another six crore are in line. The current modern medical systems treat patients using methods like antibiotics, chemotherapy, surgeries, radiation, etc. but even after successful surgeries, the patients’ body is left in great trauma.” He further added, “The fusion of both- modern and ancient medicine- helps strengthen your body and fight diseases. This new-era medicine will emerge from India and will also benefit the people who are unable to access quality healthcare services.’
Dr. Trehan named his hospital Medanta meaning that it would prove as an end of medicine. If any patient did not get treatment here, he would get it nowhere else. At the time of setting up this hospital, Dr. Trehan had also announced that by incorporating Ayurveda therapy, Medanta would try to make treatments cheaper and afoordable.