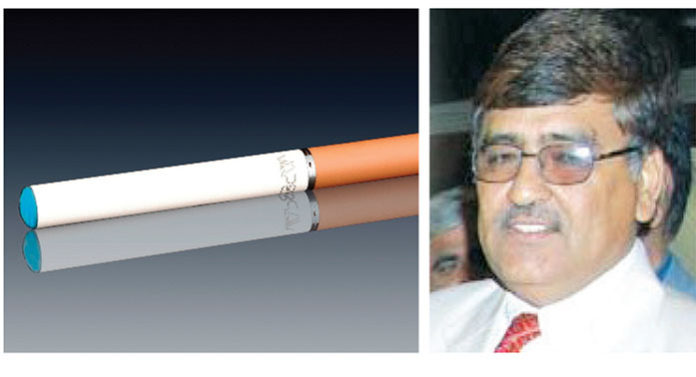 This concept of intoxication of nicotine in pure chemical form is an imported concept from the western world and is more popular among the younger generation especially in engineers, computer software programmers and persons working in the night shifts. High concentration of nicotine in pure chemical form is more injurious to the health. Nicotine may cause mouth sores, blisters or irritation, nausea or vomiting, sore throat, acid or sour stomach, belching, diarrhea, dizziness, heartburn, blurred vision, headache, nervousness, hiccups, mouth tooth jaw or neck pain, problems with teeth, unusual tiredness or weakness etc.

Intoxication of nicotine in pure chemical form in e-cigarettes is becoming popular because of its longer durability; no smell remained in the mouth and produced in air as no smoke is generated after in hailing e-cigarette. E-cigarette also does not require any matchbox or lighter to lit the cigarette as vapours are generated through re-chargeable electronic gadget. Rather e-cigarettes sometime contains mint, menthol or any other flavour which masks the pungent smell of tar in normal cigarettes. Therefore, these e-cigarettes are becoming popular among the younger generation, school going children and even in the girls who are unaware about the harmful effects of nicotine in pure chemical form.

It is pertinent to mention that nicotine in pure chemical form has been declared as poison by Govt. of Haryana vide gazette notification No. S.O. 136/C.A.12/1919/Ss.2 and 8/2015 dated 3rd July, 2015 at Sr. No. 20 in Punjab Poisons Possession and Sales (Haryana Amendment) Rules, 2015. This notification has been issued by the Govt. of Haryana after interlocutory orders passed by the Hon’ble Punjab and Haryana High Court in the Public Interest Litigation filed by Burning Brain Society on the matter of abuse of nicotine. The CWP no. 14597 of 2007 having case title Burning Brain Society v/s State of Punjab and Others was filed by an eminent lawyer and social worker Sh. Hemant Goswami with a noble intention of eradication of intoxication of nicotine in pure chemical form (abuse of nicotine). Govt. of Punjab through their State Drug Controller by an executive order banned the manufacturing, sale and use of e-cigarettes.

The younger generation mostly qualified professionals using e-cigarettes and became addict to the nicotine in pure chemical form must be made aware to the harmful effects of this intoxication on body and mind of the person. They may also be made aware of the legal aspects of e-cigarettes.