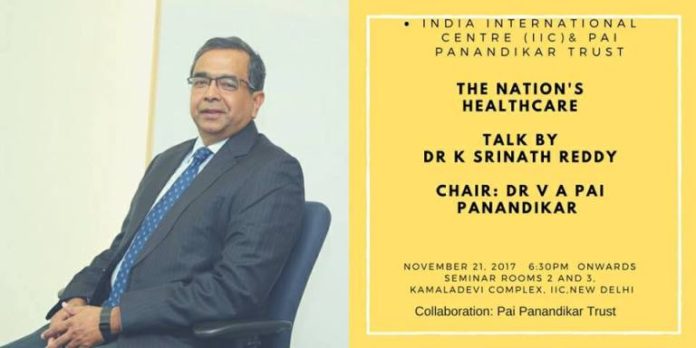 New Delhi: Dr K Srinath Reddy, Chairman, Public Health Foundation of India (PHFI), read the riot act in his India International Centre lecture this month. Without mincing words, he warned that India might lose demographic dividend if health system remained as it is.

Though, Dr Reddy, the architect of the concept of Universal Health Coverage (UHC), started with good news that India gained 10 years in life expectancy between 1990 and 2016, the current health scenario that he highlighted in his lecture did not enthuse much. He averred that of Life Expectancy of course has increased from 32 years at the time of independence to 68.2 years in 2016 but India has to go a long way in setting its healthcare system in order. Underlining the paradox of India’s Public Health, he said, ‘Undoubtedly India’s economy is well ahead of its South Asian neighbours but we have the second lowest Life Expectancy in the region. We can be proud of our success in polio eradication but our full immunization rate among children is bare 62% while it is more than 90% in Sub-Saharan Africa. Under-5 mortality rate in India is 6 times higher than in Sri Lanka in 2016.

Dr Reddy further said that lot would have to be done to measure up to the level of health indices of even our so called lesser brethren Bangladesh and Sri Lanka. Disease burden rate from malnutrition is 12 times higher than in China; Disease burden rate from unsafe water and sanitation was 40 times higher than in China in 2016.

Dr Reddy, one of the few globally acclaimed healthcare policy experts, seemed to pin a lot of hope on new health policy which has professed Universal Health Coverage (UHC) as a national commitment. But he said in no uncertain terms- UHC in India is not a straight path. It calls for a strong national commitment and would entail a multipronged strategy. He prescribed establishment of a credible and effective regulatory systems for administering UHC. Dr Reddy stressed the need to mainstream AYUSHcare while pursuing UHC. He said that even Ayush is confined in the urban areas while it should be more in rural areas.

Dr Reddy also stressed the need for prioritization of primary health care for financing and human resource development & deployment. He emphasised the need to commit 2.5% of GDP as public financing for health and strongly advocated provision of essential drugs free of cost. Dr Reddy said that the most ideal scenario would be universal access to good quality health care services without anyone having to face financial hardship as a consequence.