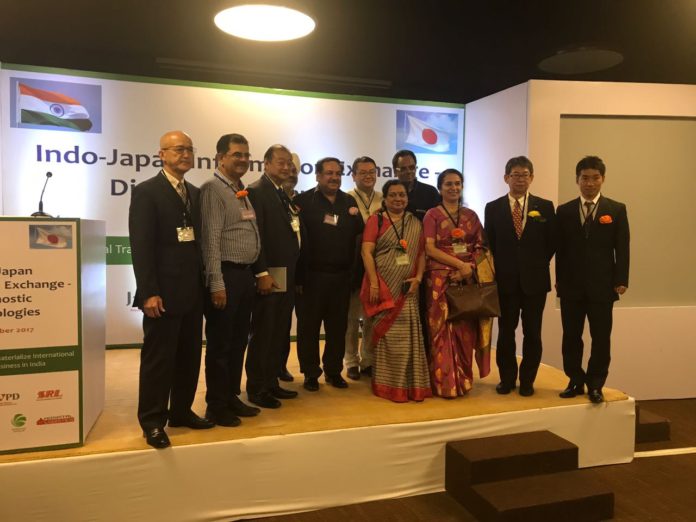 New Delhi: Bullet train may just be the beginning of speed in India. Soon after, Japan has assuredly moved to give the country gift of a life time by promising to unveil an age of speed and accuracy in diagnostics at low cost that would in turn enhance longevity of people here with quality of life unscathed.

The die was cast in a conference held on October 6 in Delhi at hotel Le Meridian where representatives of diagnostic industry and government of Japan expressed their intent to help India attaining diagnostic gold standard.  As for Japan’s diagnostic capability, SRL alone does astronomical 200,000 tests per day for hospitals and clinics across the country.

If Japan is one up on health indices of even USA in much less cost burden, the credit majorly goes to its amazing diagnostic industry. India is in urgent need of replicating it to cover the yawning gap that exists between life expectancies of both countries and to tackle its burgeoning burden of diseases. Japan’s seamless saga of consistent increase in life expectancy is an outcome of its robust diagnostic capabilities. Japan has done it via cutting edge diagnostic tools by stopping diseases in their track, pre-empting it, intervening at the embryonic level and by predicting risk of a disease in a person.

Japan’s entry is likely to give US diagnostic industry a run for its money as Indian diagnostic testing companies outsource their samples to them for critical tests. Diagnostic outsourcing for Indian patients to Japan would substantially bring down the cost of tests which are now costing a bomb in USA. According to health experts, if India replaces its archaic diagnostic system with that of Japan, we would not have to bemoan the abysmally low govt expenditure on public health because even the present expenditure may be enough to streamline India’s messy healthcare.

Hope floated as conference in Delhi promised as much. Japan’s ministry of Health, Labour and Welfare has approved a program named ‘Technical training for materializing international Diagnostic Business in India’ to this end, which is being funded by ‘The International Promotion of Japan’s Healthcare Technologies and Services in 2017. The program would be conducted by National Centre for Global health and Medicine under the ministry of Health, labour and welfare, Japan.

The program is said to be designed in line with the vision of Indian Prime Minister Narendra Modi which entails training of Indian doctors under skill India and brining technology from Japan under make in India.

In the conference ‘India Japan Information Exchange-Diagnostic Technologies’, Japan collaborations and cooperation in diagnostic technologies were highlighted. The conference was organized by Konoike Transport Co, limited and J-VPD, Inc. The program which will be taken forward by Japanese majors in diagnostic Technologies –Konoike Transport and j-VPD is also being supported by Embassy of Japan and Delhi Medical Association. Speaking on the occasion, Mr. Tetsuji Yamada, President, J-VPD, Inc highlighted Japanese diagnostic know- how and explained how India can utilise the diagnostic outsourcing in Japan.

‘Indian demand for the medical and diagnostic industries is expanding rapidly. However, still there are many major issues to be solved which are test accuracy, quality, cost and lead time control of  transportation due to lack of technologies, man power and facilities in the sophisticated area of genetic testing or chromosomal inspection, ‘ he added.

Mr Yamada further said, ‘Under the technical training program nearly 10 trainees will be engaged from Indian medical organization in December, 2017. We will arrange some visits to diagnostic labs and medical organizations.’  He also expressed his intent to build a special package for leading Government Hospitals by adopting Japanese proprietary automatic technologies in India to industrialise diagnostic testing thus reducing cost and providing services to big institutions with improved outcome of diagnostic testing.

Mr Minou Amano, Executive Officer and General Manager of medical Business Division, Konoike Transport Company limited, said, ‘India’s healthcare sector is witnessing double digit growth. But the supply chain is still in its primitive stage. Japan is a big success story and we need to exchange knowledge and collaborate to move to the next level.’