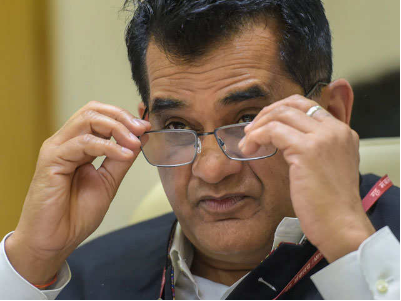 Medical Council of India (MCI) and University Grants Commission (UGC) have been the worst and most outdated of institutions and their restructuring is essential to the country’s growth trajectory, NITI Aayog CEO Amitabh Kant tells ET in an interview. Excerpts:

How does renaming and replacing UGC with Higher Education Commission of India (HECI) help?
UGC has miserably failed in setting standards, in mentoring institutions, in checking the mushrooming of substandard colleges and universities. Then there are 25% institutions that have less than 500 students. UGC, to my mind, should have come down heavily. But it has failed in its oversight act. We have reached a stage where you can’t get into a 9% to 10% growth unless you restructure your institutions. Many of our institutions are antiquated. The worst of the lot was Medical Council of India, which is replaced by a Medical Commission. The second is UGC, which is now being restructured. HECI brings in a far more empowered body, with strengthened oversight.

But how can HECI be radically different with the same UGC systems and staff?
You can’t govern HECI with the same staff. We brought in a lot of young professionals and new blood in NITI Aayog, and HECI must also build its own ethos and culture, (and) get a lot of academics on secondment basis from different universities. It has two major challenges — one, the HECI composition needs more academic representation; second — HECI should not get into micro management, it should have a long-term approach of laying down norms and standards, and bring in new talent.

What about the plans to divest HECI of fund release functions?
I think that funding is being taken away from UGC with good reason. If you look at 2012-17, 50% money allocated to it has not been absorbed by UGC; `480 cr is still to be absorbed. The reason is, there is hardly any clear criteria on how it distributes money to different universities. It is like the change from Planning Commission to NITI Aayog. Planning Commission was spending all its time in just releasing money on annual plans and five-year plans — it had become a releasing agency, focusing on utilisation certificates.

NITI Aayog doesn’t release funds any more, but it does monitoring, evaluation, ranks states on various indices, and thus creates healthy competition among states. UGC, similarly, should create benchmarks and put all related information on university performance in public domain so students are better informed when seeking admission, and that’s what HECI aims to do.

There are fears about funding being vested with government…
I do feel that funding should also not be released by government, there should be a second agency to decide this objectively through wellestablished and transparent criteria. And most of the processing should be online.

Some states are already expressing fears of HECI interfering in their domain. Your comments?
All states will be on the advisory council. The Act strengthens oversight, has enough powers to deal with this, and takes inputs and advice of states as well. Also, when HECI starts setting the trend for quality education, everyone will follow suit. Because the Centre was failing, the UGC was failing, everybody was failing in its quality aspect.

Do you think there will be political support for this move, just ahead of Lok Sabha election?
You can’t keep delaying things just because you have elections. If your objective and intentions are correct and if HECI can focus on areas where Indian higher education has failed, there will be wide support for it.

Does it mean the ambitious plans for a single education regulator are off the agenda? Why?
May be so. By merging too many institutions at once, you could create too much administrative complexity.