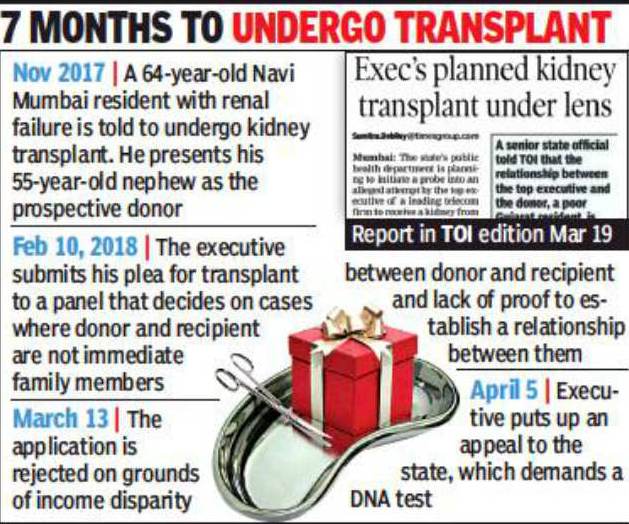 MUMBAI: A DNA report came to the rescue of a 64-year-old top telecom executive, whose plea to receive a kidney from his poor nephew, was rejected in March on suspicion that he was trying to buy the organ and they were not actually related. The kidney failure patient’s journey of rejection and appeals over the last three months ended on Thursday when he underwent a transplant at Jaslok Hospital.

Experts lamented how bureaucracy stood in the way of life-saving surgeries, even as officials claim that every caution must be exercised. The Navi Mumbai-based executive’s plea to receive a kidney was first rejected in March by the state’s authorisation panel on grounds of income disparity. The recipient is a high-level executive with a telecom giant with an annual salary of 82 lakh while the donor, presented as his nephew, is as a security officer in Gujarat for an annual salary of 2 lakh. Officials grew further suspicious for want of photographic evidence to establish that their relationship.

But questioning the state’s decision to reject his application for his affluence and absence of family album, the executive went into appeal. The case went to Sanjay Deshmukh, secretary of medical education, who ordered a DNA test, an approach rarely used in unrelated transplants. The executive’s family friend rued that the first rejection happened despite producing a matching Human Leukocyte Antigens (HLA) test report that tells if tissue types of two persons are immunologically compatible.

The executive’s tissues had matched with his sister’s whose son was donating the kidney, thus proving they were related.

“Yet we were told to produce DNA reports. Despite the DNA report, the order came after three weeks. The lack of urgency is appalling while lives of critical patients hang in balance,” said a family friend of the executive.

While the first rejection was at the hands of the directorate of health services, the nod came from the medical education arm. Dr Pravin Shingare, who heads DMER, said decisions in unrelated cases are given in 2 weeks but it was an unusual one. “Our job is to see the motive behind donations. In this case, the socio-economic difference between the two was huge so we asked for a DNA test,” he said. A state official said they are duty-bound to safeguard donors’ interest. “In this case, neither of his sons, both based abroad, was willing to donate,” the official said.

The executive’s family friend said the state can’t take 3 months to clear doubts in matters of life and death.