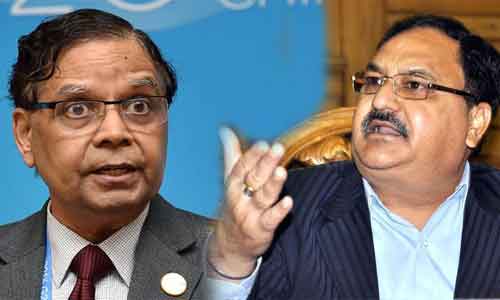 New Delhi: NITI Aayog thought that health of people was none of the business of the government. The sick should be left to fend for themselves in the face of unconscionable private health providers.
The government of India policy think tank also thought public spending on health was a sheer waste of money.
Highly placed sources said to Medicare News that NITI Aayog bared such immoral fangs during parleys over national health policy that has been unveiled not long ago. The National health policy which earned wide acclaim would not have been so altruistic if NITI Aayog had its way. Looking completely smitten by private lobby, the think tank vociferously argued in favour of leaving the turf completely for private health sector. Aayog’s mandarins rubbished public health sector, saying it has not so far acquitted itself credibly. They also wanted National Health Mission to be shelved because, according to them, it had served no purpose.
Sources said Central Ministry of Health and Family Welfare had to fight a pitched battle of nerves with NITI Aayog to save national health policy for people. Thanks to firmness shown by health ministry officials, fully supported by Central Health Minister J.P. Nadda, the national health policy came out unscathed from the vice like jaws of NITI Aayog. Think tank officials were told point blank that public spending must be the core of India’s national health policy while also rightfully leveraging private sector to fulfil the goal of Universal Health Coverage. Health Ministry officials said to NITI Aayog interlocutors that the government would have to be the prime health provider to fulfil the slogan of Healthy India given by Prime Minister Narendra Modi.
Health Ministry put its feet down in favour of public spending on wellness of people in general. Its officials held firmly that National Health Mission achieved a lot which is well reflected in the substantial decline in infant and maternal mortality rates.
So, it was a veritable labour pains that health ministry had to endure while holding brief for enhanced public spending on health. The hard- earned National Health Policy is for sure a victory of people for which health ministry officials deserve all the accolades.
Contrary to what NITI Aayog maintained, the ideal position is that the expenditure on the treatment should not at all be people’s headache. The government should fully own up the responsibility of delivering quality healthcare to all and sundry. Like school education, health should also be made the fundamental rights of people.  The recently unveiled National Health Policy is regarded as leap of faith of sorts in that direction. A high official of Ministry of Health and Family Welfare said to Medicare News, ‘the right to health starts with Primary Health Centres. Revamping Primary Health Centres a la National Health Service (NHS) being the bed rock of National Health Policy, we are in a way headed towards health being fundamental right.’