New Delhi: It is not his age to do what he is doing – aggregating free medicines from donors and ensuring they reach the needy patients. While his peers revel in holidaying and other hobbies as is wont of school life, Vishad Khanna stands apart as a Good Samaritan saving thousands of lives. And he is doing it of his own volition. This sapling of philanthropy will certainly sow a sense of service in society. Vishad has launched Aushidhi, an online platform which provides free of cost medicines to the needy.

Mr Khanna, aged 17, of class 12th in Delhi Public School, RK Puram, has been zealously working towards providing free of cost medicines to the underprivileged section of the society. He is a student of Computer Science and has developed this portal which connects with the lifeline of needy and poor sick patients with Donors like Company/Pharmacy/Doctor. Aushidhi is pioneering in providing free medicines and health checkups to the deprived ones who required it the most but cannot afford it. Its online platform bridges the gap between free medicine provider and people who seek medicines.

Aushidhi is a place where a donor can register and list the medicines to donate. Similarly, the end user can have the visibility of medicines in terms of Name, Details, quantity and can request for delivery. Aushidhi ensures the medicine reaches to the requester. Aushidhi collects medicines from Donor, who mostly is the Pharmaceuticals Company / Pharmacy / Doctor/Any Indian Citizen having an excess of near expiry stock lying with them. The Needy request medicines which are updated on the web catalog and Aushidhi gets it delivered free of cost. Aushidhi also conducts various free health camps integrated with theater shows, free medical health checkup, and free medicines. 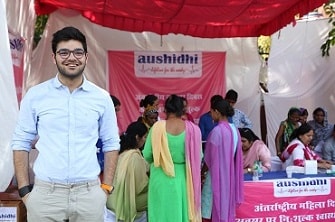 Vishad Khanna, Founder of Aushidhi, said, “I always had the zeal to do something for the society., At my early teens, I understood the harsh reality of the healthcare industry in India where on one end we are excelling and growing exponentially, and on the other end, there are still people who don’t have access to even basic medication.  I realized that pharmacies, doctors, clinics, primarily the suppliers of medicines have a large stock of medicines that are nearing expiry date. Hence, most consumers don’t end up buying them, and they are disposed off even before their expiry date. Therefore, there remains a huge stock of wasted usable-medicines. Aushidhi organizes donations of those extra-medicines from the Donors free of cost through its website, which generates a bridge between Donors and Recipient to engage with those in need through local doctors in slums, villages, etc. There is a catalogue enlisting the available medicines. The needy can post their request for a medicine on the website. Aushidhi responds to their request and then delivers the medicines to the receiver at his given address, free of cost.”

Aushidhi also conducts health awareness shows under the leadership of Vishad who is also the president of the theater club of Delhi Public School R.K Puram. These theater shows showcase the preventive measures for life-threatening diseases such as Cancer, AIDS, TB, etc. Several camps have also been conducted by the team.

As per Lancet report, an estimated 8.6 million deaths in low- and middle-income countries every year are due to conditions treatable by healthcare, of which 5 million result from poor quality of care and 3.6 million from insufficient access to care. Despite having a thriving Pharma industry, several studies have claimed that there is a lack of accessibility to affordable and essential medicines in the country. India is still not able to curb the prevailing mortality rate due to the scantiness of medicinal care.