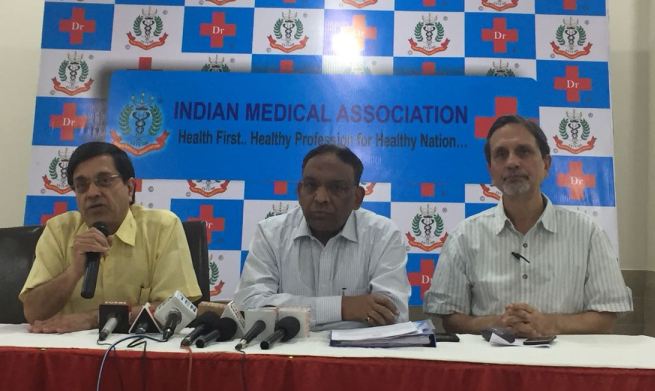 New Delhi: Doctors demand Central Act to rein in violence against them, albeit meekly as they are aware that some of the blame might reasonably be assigned to them too. They are of course worried about escalating violence against doctors but shun strident posturing as ecosystem is vitiated against them. They earnestly want patient-doctor relationship to be mended. They also realise it takes two to tango and members on both side of divide have their bits to do.

These are thoughts that are crossing the minds of doctors as they grapple with unprecedented hostile environment. Addressing a press conference regarding national seminar, Dr Vinay Aggarwal, past National President, IMA said, ‘ We, of course, want a Central Act as a deterrence against violence against doctors but also wish no need arises for its use against patients and their relatives. We fondly wish patient –doctor relationship be restores as it was once upon a time.’

To this end in view, Indian Medical Association (IMA) is conducting a National Seminar on the theme ‘Doctor Patient Relationship and violence on doctors’ on 26th May 2018 in Delhi. The National seminar will be inaugurated by hon. LG Anil Baijal. More than 300 doctors from all over India are expected to participate.

Though 17 states have brought out laws against the violence on doctors and hospitals, there is a wide disparity and very little scope of implementation amongst the state legislations due to the absence of a central law.

Dr Aggarwal further said, ‘IMA realizes that more has to be done on the issue than just to legislate it. The problem is assuming a serious dimension; of late even the PM Narendra Modi has condemned the atrocities. The seminar will also incorporate sensitizing all the stakeholders to have empathy towards the medical fraternity and healthcare establishments.  With the changing milieu, there is an urgent need to create a protocol for improving the doctor-patient relationship.’

It is in this backdrop that the Indian Medical Association believes that there is a need to kick-start a broad-based national discourse with participation of all stakeholders.

In order to launch an advocacy for the Government to expedite the Central Act to cover such violent acts and provide regulatory safeguards for doctors and medical establishments as protection, luminaries from various sectors will be present.

‘The Govt. of India must propose a strong Central Act prohibiting violence against doctors in all forms, hues, shades, matching with the enabling existing provisions in the Indian Penal Code, so as to evoke uniformity across the States in respect of its implementation and thereby extend much needed and desired immunity to the doctors while on duty from all forms of violence from any and all sources as they be and declare clinical establishments as safe zones in a real sense.’ Says Dr RN Tandon, Hony. Secretary General, IMA

‘Unfortunately the culture of violence is glaringly permeating in all the aspects and is becoming alarmingly common in the urban healthcare sector. Many instances of patient’s relatives turning violent against the doctors are seen and are on a rapid rise, both in private and public sector which needs to be curbed down immediately,’ Added Dr Vinay.

Doctors and hospitals are largely impacted with the growing intolerance and violence against them. Doctors who were traditionally revered to as Gods are now becoming victims to the intolerance of the patient and their relatives. The social norms are being severely distorted even as the society stands as a mute spectator to this degeneration of our public life,’ Said Dr Vinod Kumar Monga, Hony. Finance Secretary, IMA.

There is no denying that partially the healthcare industries too are to be blamed for this distortion in society. The doctor-patient relationship has hit a new low in this rapidly changing culture of coercion and diminishing trust which is scary.

The private healthcare industry has a critical contribution in enhancing the health status of India in terms of availability of world-class facilities and access to high-end care with insurance facilities. Highlighting the growing capacities of Indian doctors and the cutting edge research and medical interventions will be one of the highlighted agendas.