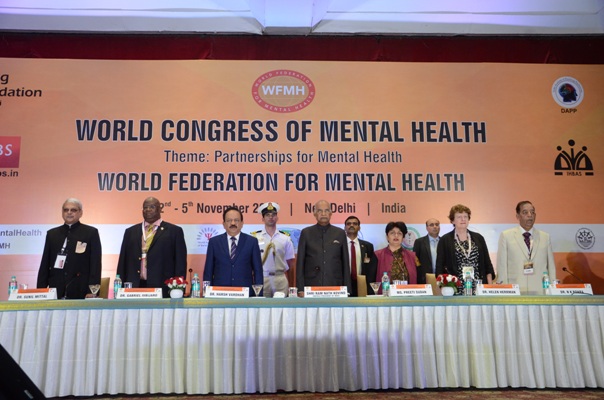 New Delhi: With inauguration of 4-day World Congress in Delhi, mental health has assumed the focus as never before in India. Its aim is to bring mental illnesses in the mainstream of health deliberations and wipe out the stigma attached to it.

World Congress on mental health organized by WFMH (World Federation for Mental Health), the largest global alliance of mental health professionals, national health associations, NGOs, policy experts, and other institutions, was inaugurated today by Ram NathKovind, the President of India. The conference is being held for the first time in the SAARC region. India had to lobby hard for this Congress. About 1000 delegates including 300 from abroad are participating in the Congress.

Giving warning about the impending mental illnesses epidemic in the country, President, Ram Nath Kovind, in his address said, ‘The world congress was the need of the hour. With 65% of the population comprising people under the age of 35 years and the increasing incidence of mental health disorders among the young, India can afford to look other way. Some of the biggest challenges that hinder accessible mental healthcare in India include widespread stigma, denial and shortage of doctors.’

The president stressed on the importance of striking a public-private partnership to cope with the situation.  He added that the government has already started a programme under which 22 centres across the country catering to mental health patients have been opened. He concluded by highlighting the importance of telemedicine in bridging the gap between patients to doctors and congratulated the conference organizers for putting together a spectacular show.

Dr Harshvardhan, Minister of Science & Technology, Ministry of Environment, Forest and Climate Change and Ministry of Earth Sciences, said, ‘ We have undertaken some programmes on mental health. Research is underway on a multimodal study on mental health disorders including schizophrenia, depression, and bipolar disorder where deep clinical phenotyping along with imaging and genetics will be used. Patients with inherited mental health disorders are being studied so that adequate treatment procedures can be developed accordingly.’

He added that the government is developing state-of-the-art centres for mental health and has also developed a software –‘KALPANA’ which will predict mental health disorders through neuro-imaging techniques. He concluded by stating that the Prime Minister envisions a new India by 2022 and medical professionals can play a great role in helping achieve this objective.

Ms Preeti Sudan, Secretary, Health & Family Welfare, GOI in her address said that about 11% of the Indian population lives with some or the other mental health disorder. One out of 20 Indians suffer from depression. The economic burden of mental health disorders in India will cross 1 trillion USD by 2030 if adequate measures are not taken to make treatment and care more accessible. She added that the Congress will provide a platform to discuss the roadmap to meet the existing challenges. Limited availability of resources, and the stigma surrounding this condition, are all bottlenecks that need urgent action.

In his Presidential Address, Prof. Gabriel Ivbijaro, MBE, President, World Federation for Mental Health, said, ‘There are many barriers to mental health around the world, the most important being lack of awareness and the social stigma associated with this condition. I am told in India, though some change is coming, mental health is still viewed with much of stigma. With the insights and recommendations from this conference, we hope to find a way forward in removing the taboo associated with mental health and make a positive difference in the lives of such people.’

Adding their inputs, the Organizing Chairmen, Dr Sunil Mittal, Director CIMBS India, and Co-founder and Past President, Indian Association of Private Psychiatry, and Dr Neelam Kumar Bohra, Patron, Delhi Psychiatric Society, and former President, Indian Association of Biological Psychiatry, said, “The 21st Biennial World Congress of WFMH aims at giving the discussion on mental health the impetus that it deserves. Despite its enormous social burden, mental disorders continue to be driven into the shadows by stigma, prejudice, fear of disclosing an affliction because a job may be lost, social standing ruined, or simply because health and social support services are not available or are out of reach for the afflicted and their families. The discussions over the next few days will cover a range of subject’s right from childhood mental health to mental health as portrayed in cinema. The deliberations promise to be engaging and fruitful in finding a way forward and helping remove the lack of awareness surrounding the issue.”

Ms Helen Herrman, President, World Psychiatric Association, in her address said, “While there are many challenges surrounding mental health, there is a growing impatience to move this subject from the periphery to the centre of the global health and development agenda. To realize the goal of universal health coverage for those with mental health issues across the world, it is a must that prevention, treatment, and care services are integrated with psychosocial support mechanisms, and further translated into accessible service delivery and financial protection programmes.”

The first day of the conference saw some key sessions such as School Mental Health Challenges for India, Lessons from the Combat Zone (addressing terrorism and mental health), addressing the Global    Crisis of Mental Health Stigma in the Clinic and beyond, and Childhood Depression, among many others. Scientific sessions and sessions including paper presentations were also held at the venue, covering some interesting and noteworthy topics. The event, in the days ahead, will witness caregivers share stories about challenges faced by them while taking care of those with mental health issues. Other special highlights include bike rally, yoga workshops, photography contests, awareness events, film festivals, and art exhibitions. Prominent dignitaries such as Mr Kailash Satyarthi, Nobel Laureate & Architect of Global March Against Child Labour; Mr Prakash Jha, Multiple Award-winning Independent Filmmaker; Ms Ileana D’Cruz, Renowned Actor and Mental Health Advocate among others will share their experiences as well.

This biggest global event with mental healthcare at centre-stage provides an opportunity for scientists, advocates, service providers, service users, and caregivers to get together to identify and discuss significant mental health issues, transfer information, and build networks and friendship.