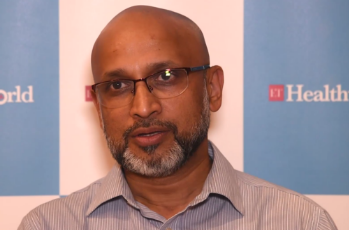 I think Indian healthcare industry is on a very promising trend. We have all the expertise available but don’t have an organised healthcare system. I’ll give you an example, if you look at United Kingdom, we have what is called as a National Health Service and we have individual specialist working in individual centres which are tertiary referral centres. So if a guy gets a lung cancer say in Sheffield, this patient will automatically, within the system, get referred to me transferred across and I will operate on him. So the healthcare is available to everybody in the whole country at the same level.

In India it is a bit like a lottery system. If you live in a tertiary city, if you live in high end city, you have access to corporate hospitals, you have access to a good government hospital like AIIMS and you might be able to get your lung cancer treated with the highest efficiency, by the same token if you lived in a smaller city like Indore, Ranchi or may be in a even smaller city like the village there is no hope that they will be able to diagnose your condition in time or be able to offer you the correct treatment. So there is a lot of inequity in healthcare within the Indian system but the expertise of the Indian doctors is very high because they do see a large number of patients.

This expertise is valued overseas and internationally but within our country we are not able to use that expertise for the benefit of the population at large because it’s not just also about handing the high end treatment, it’s about being able to diagnose the problem. That is the problem with the Indian healthcare because there is a lot of problem with tuberculosis in India.

So challenges are many. Cost is always an issue in a country like India, where healthcare is an expensive business. But with the new government initiative of providing healthcare for all at affordable prices I think the country is heading into the right direction. I do feel that the Indian government is taking initiatives from countries like Canada and UK to really provide high quality healthcare at affordable prices and that is the main trend that I think we need to embrace within the Indian healthcare system.

Now, traditionally when I started training as a cardiothoracic surgeon, the normal access into the chest to operate on lung cancer would have been a large cut on the chest wall, cutting through muscles, cutting through all the layers and spreading the ribs wide apart to get into the chest. But with advances and with technology also catching up, all of that now is almost history. Now we make tiny cuts on the chest wall, we dissect the muscles, we do not cut the muscles and more importantly we do not spread the ribs. We go between the rib spaces and introduce the instruments in the camera and we manage to do all the same surgeries that we were doing with the open large cut and provide the best of healthcare benefits for the patient. The advantage from this tiny cut is that cosmetically they are better, pain wise they are better because less cut, less inflammation, quicker healing, less pain and the patients is in the hospital for a shorter duration of time. One of the main causes to healthcare is in hospital stay. If you make a large cut on a chest wall the patient is in the bed for 7-9 days before you can even be discharged.

With Video-assisted thoracoscopic surgery you can actually admit the patient in the morning, do the surgery in the afternoon, next morning the drain comes out and he can be discharged the next day. So it is that quick turnaround that helps the patient get better.

The advancement of Video-assisted thoracoscopic surgery is called as a Robotic Thoracic Surgery which I have mentioned earlier. In this, I use a robot which has got four arms, so the robot can move 360 degrees around, so you really get an excellent view of the structures that you are operating. Not only it is a magnified view but it is a 3D view because the robotic camera has two separate cameras fused into one rod. So when I sit on a console my right eye gets one image, my left eye gets one image and my brain truly fuses it into the three dimensional picture. The depth of perception is absolutely accurate down to the millimeter, so the accuracy of the operation is very high and particularly when you are operating in the chest, around heart and around important blood vessels and nerves you need to be accurate down to the last millimeter because during these surgeries the difference between life and death. So robotic surgery actually brings that accuracy to the patient and provides the benefit.

The other benefit is that it is a wireless technology, so I could be sitting in India and the patient could be in the UK and I could operate on the patient. So high end expertise can be available to a patient, I don’t need to travel to the hospital to provide robotic surgery for them. All of this helps to make lung cancer surgery safe and cost effective.

The robot itself may be expensive, instruments may be expensive but the reduced hospitals stay actually offsets the cost in a big way for the patients. So eventually if you compare open surgery vs VATS vs robotic, you will find that the VATS and robotic surgery patients are spending less for the same operation because they are staying less in the hospital and what about the benefit to the economy at large and the country at large. If you had an open surgery these guys would be unwell for one-two-three months before they can get back to work. With a robotic surgery, next day or two days later we are discharging the patient and after four weeks he is back to his normal life so that helps the health economy of the country, it helps the industrial economy of the country and more important, a lot of our patients depend on their salaries, they cannot afford to be off sick for 3-5 months.

So it is not just their own lives but also lives of their families, dependents. So robotic surgery and VATS directly impacts every single aspects of the patient’s life. So we have to look at the bigger picture when we look at cost.

We have developed techniques and training modules for surgeons which are specific to the Indian environment. So what we did was we first set up our own department, we proved that we could do a VATS and robotics in tuberculosis patients and then we started doing training programmes.

In the first stage the surgeons would come to me, they would first attend a few lectures by us showing our techniques. We would then take them into an animal lab where we take the surgeon in, we make the incision on an animal model. The next step after having done that, he comes into my theatre and spends the whole day watching me do the same operation, so that’s a double training.

After that he goes back into his own institution and I travel from my place to his place as a mentor to stand opposite him and take him through these complex operations in his own environment. The two things that happened when I do this is A his confidence goes up because I am there in the room, he knows that if something goes wrong I can help him through and more importantly he starts to believe in his own environment, he believes that this complex surgery, this high end technology can be inculcated in his own environment and that is the believe that people need.

A lot of people from government hospitals particularly struggle with this believe, they think that high end vats and robotic can only be done in corporate hospitals but what we did was we went out to small hospitals, government hospitals and taught them how to do these surgeries with their own instruments. We have designed very cheap instruments for them and gave it to them and said start doing it in your own set up.

We have trained about 250 surgeons in India who are now actively doing VATS, I am so pleased to know that there is VATS happening in small towns, villages and hospitals. Robotic is a different ball game because the initial investment in robotic is very high so that cannot be implemented at a large scale that has to still be in tertiary area but VATS definitely has reached the smallest tier three cities. So that’s one way of training people.